How about a little sous vide recipe for a Thursday pick-up?

This how-to is from several weeks ago, which doesn’t mean the recipe is any less fresh. The way the meat fell off the bone indeed requires us to make this deliciousness again. Here’s how we started: 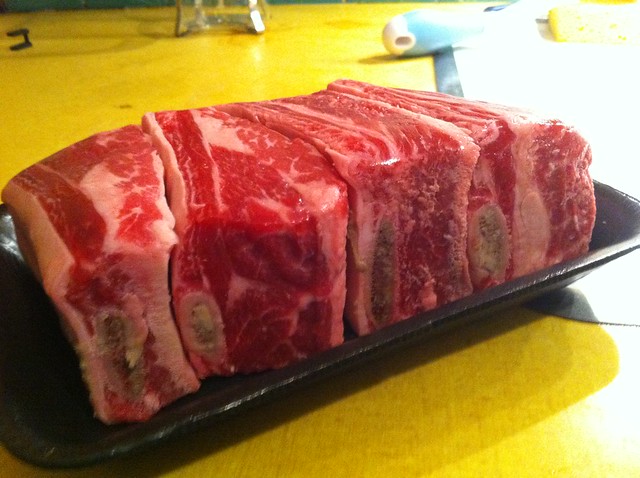 Short ribs. We paid $8 for the whole pack, and wait until you see what we did with them.

Like we do on many of our random grocery trips, Jamey came across these babies on sale. He picked them up, checked the fat, and decided on our next sous vide item of cooking. These short ribs were so meaty they might have come from a mammoth.

In one of his miscellaneous sous vide recipe searchings, Jamey previously found a recipe suggesting that the short ribs cook for 72 hours in the sous vide. I thank the genius who initiated this idea.

So, we pulled out the plastic bags, dropped the short ribs in, drizzled them in some olive oil, and threw in a little garlic, salt and pepper. 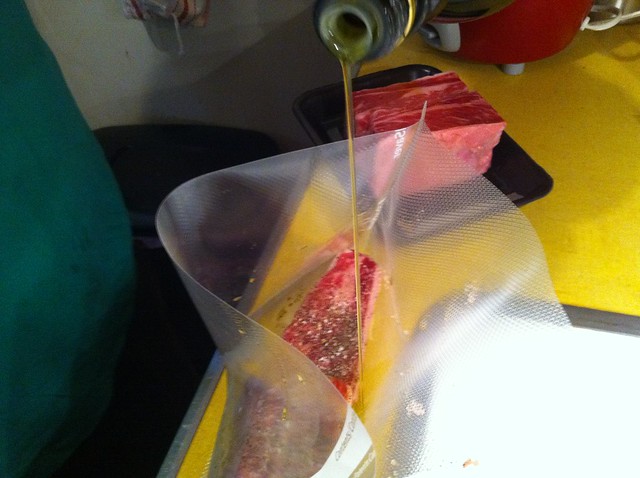 Drizzling on the olive oil and spices...already looks delicious. 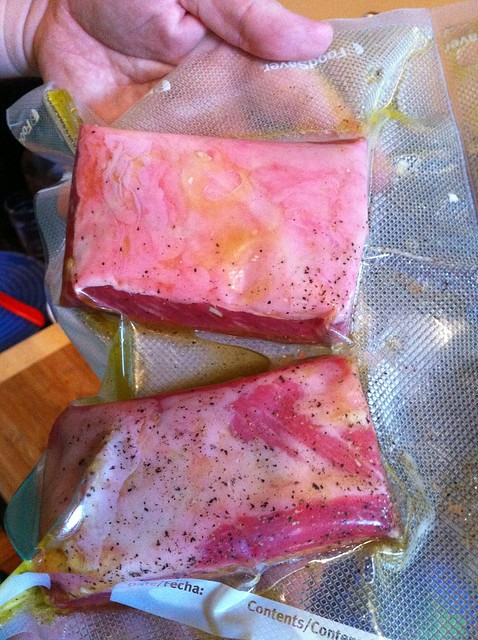 ...Then we vacuum sealed them up.

Wednesday could not have arrived sooner. Jamey checked the ribs every morning, poking his head into the steamy bath water of the sous vide. We were hungry to see how these turned out. Luckily, we picked up a few extra ingredients to turn this meal into a real feast: butternut squash! 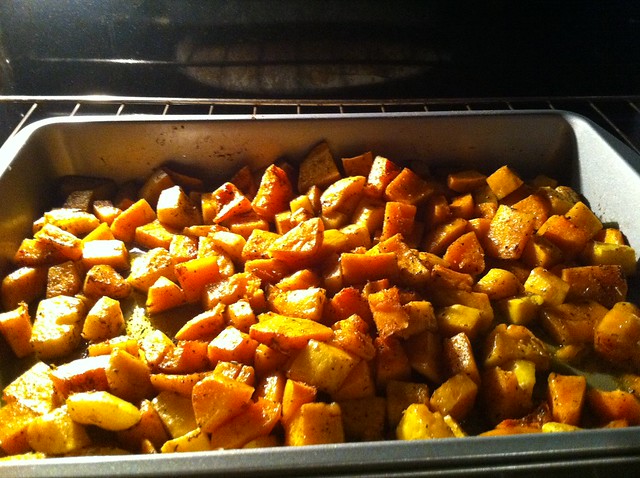 I could pretty much just eat this as a meal itself.

While not quite in season, I discovered on the same short rib grocery trip that the Teeter offers chopped butternut squash in the produce section. Do you have any idea how much pain, time and suffering this is going to save me? Needless to say, it might have changed my life in the kitchen. Itossed the squash in olive oil, salt, pepper and five spice, and left it in the oven for an hour at 380 degrees. When the butternut squash entered its last 20 minutes of cooking, Jamey pulled the short ribs out: 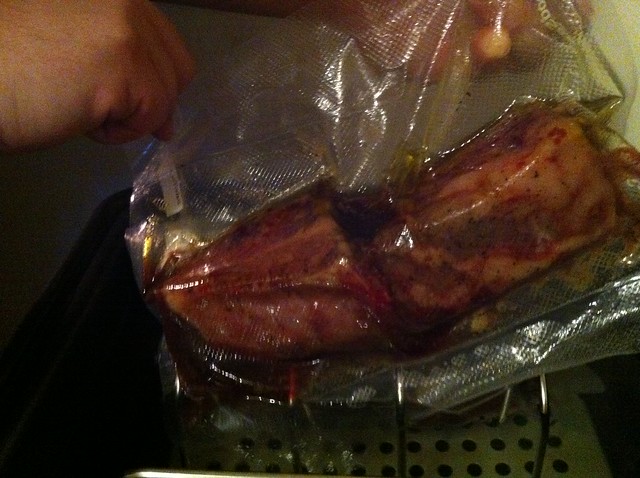 Then, he patted the short ribs dry with a paper towel to prepare them for the next action… 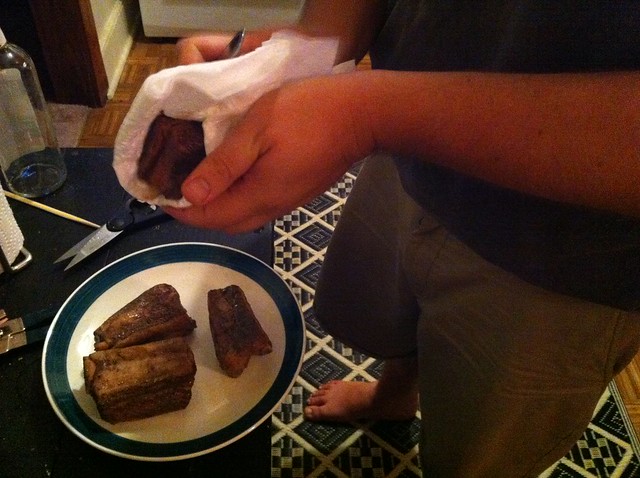 It’s funny how naked meat looks so unappetizing, even if it’s cooked all the way through. I never really understood what judges on Top Chef meant when they talked about the unappetizing texture of sous vide meat until I had tasted it myself: if it’s not charred or grilled after its time in the sous vide, red meat can often be a little too smooth or slick to the taste buds without a little grit added after. 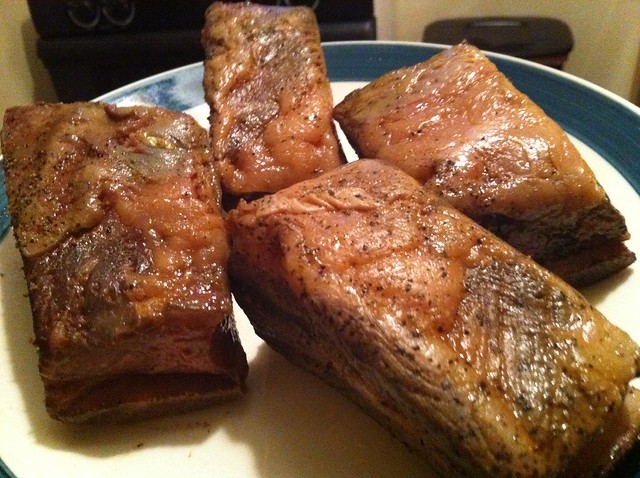 Naked short ribs just out of the sous vide. Yeah, they could use some texture.

Luckily, Jamey had picked up a new toy to remedy this. 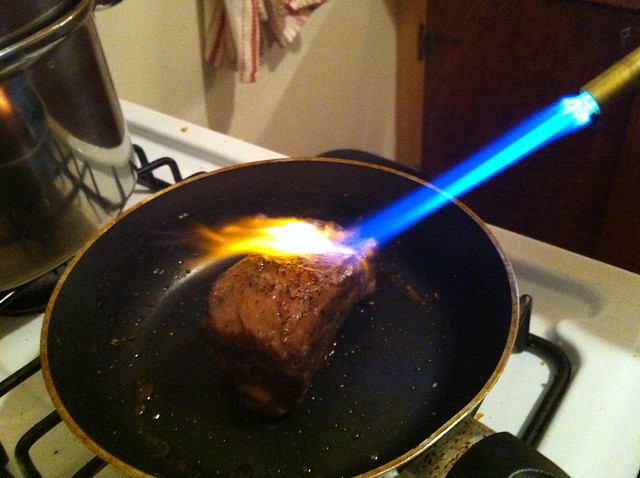 Apparently, a plumber’s blow torch is only $15 versus $60 for a chef’s. Ridiculous! Jamey found this one at a hardware store.

Back on the plate, you can already see the blowtorch has added a whole new density to the short ribs: 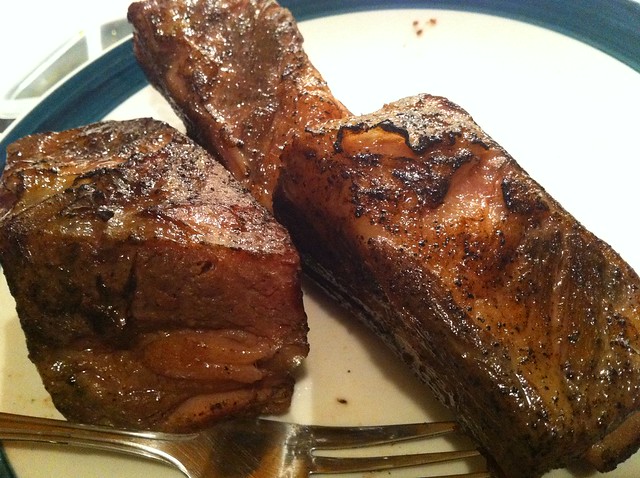 Oooh yeah. Now that's a piece of meat to sink your teeth into.

All on a plate with the butternut squash and a side of broccoli, the short ribs ruled the night. I can’t wait to make this meal again. 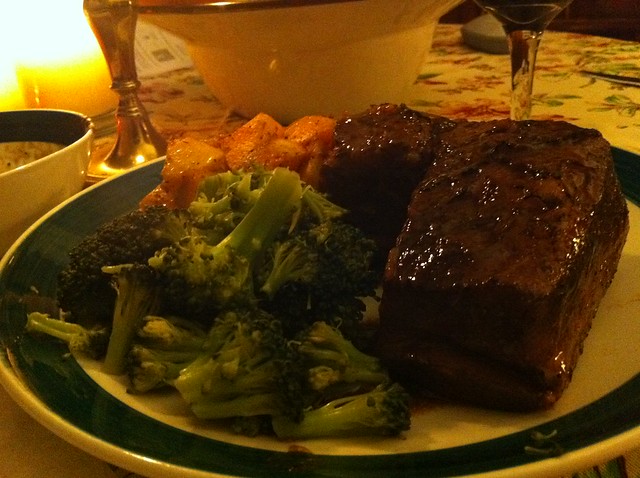 Feast your eyes on this.