In the midst of all the hub-bub we’re currently involved in, there are a few bright points. Very few if you don’t like dresses, flowers, and talking about dresses and flowers…

So tonight’s order, straight from Claire’s Mom, was to decide on our signature cocktail at the reception.

So, I present to you, my homework: 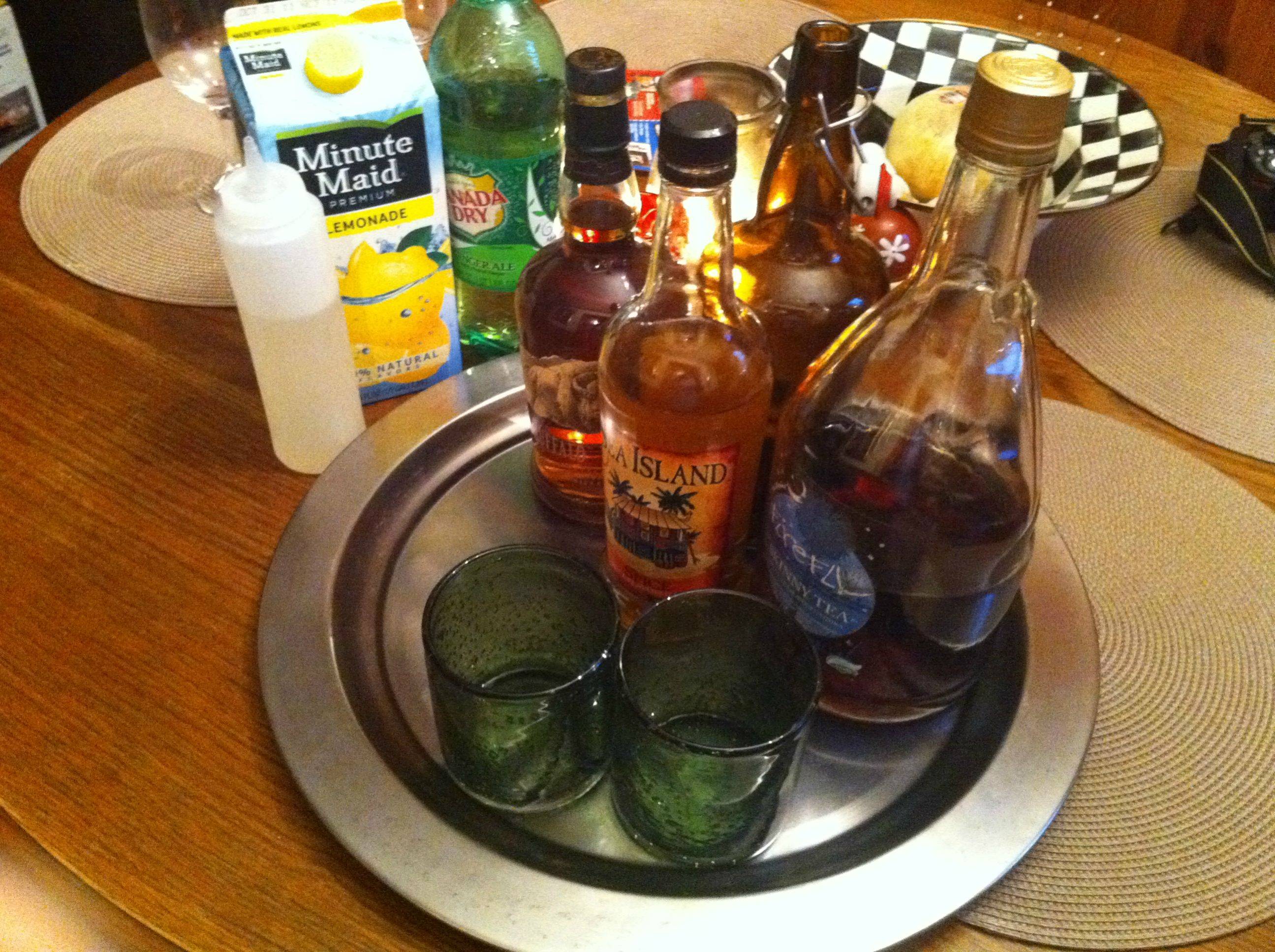 In the interest of transparency, Claire and I have been testing this for the last few hours, so if I wax episodic, philosophic, or academic in the next little bit here, please forgive me. I’m afraid our taste tests may have made me a little loquacious.

What we have here is:

Buffalo Trace Bourbon – Easily the most astoundingly good Bourbon I’ve ever had for under $30 a bottle. Seriously, if you like bourbon or know someone who does, do yourself a favor and spend $22 on them. This is a new favorite of mine, so I would like to see it become our signature.

Firefly Sweet Tea Vodka – An obvious front-runner. This came out when I was still in graduate school here in Charleston and it quickly swept the city and the entire Southeast. I remember when stores would post placards with how many bottles of Firefly they had in stock.

Sea Island Rum – Another Charleston spirit. The Firefly distillery has branched out and created both a bourbon and a rum. This Rum was recently launched (Claire attended a dinner with their master distiller) and is really great. They make it out of local sugarcane and age it in bourbon barrels for a really great-tasting drink. I’m not even that big a rum fan…

Jack Daniels – Interesting fact about me is that I’ve been to the Jack Daniels distillery three times. All before the age of 15. Thanks, Mom and Dad! Jack is an old-standby. There was a time when everyone was always remarking how much I looked like John Belushi and Jack makes me remember those times I actually did. (Please ignore this Mr. and Mrs. Lenenski.)

So there’s our line-up. For mixers we have Water, Lemonade, Ginger Ale, Simple Syrup, and some fruits and other stuff lying around that didn’t make it into the above picture.

Round 1: We’ve mixed the Sea Island Spiced Rum with Ginger Ale and Lemonade. These are really pretty excellent already. The Ginger Ale and Sea Island Spiced Rum taste really great together. Like, really great. I could get used to this kind of cocktail. Which is convenient, since spiced rum is basically a food group in Belize and we’re going to be spending a little time there pretty soon. I’ve been reading a bit about the local cost of living and apparently spiced rum is about $4.75 a handle. But that’s all anecdotal! The ginger ale and spiced rum concoction is one that Claire suggested and I’m really impressed with it. It’s sweet, but not cloying, and very refreshing. I think if we were to drink this around the house I’d definitely bring some Blenheim’s into the mix. 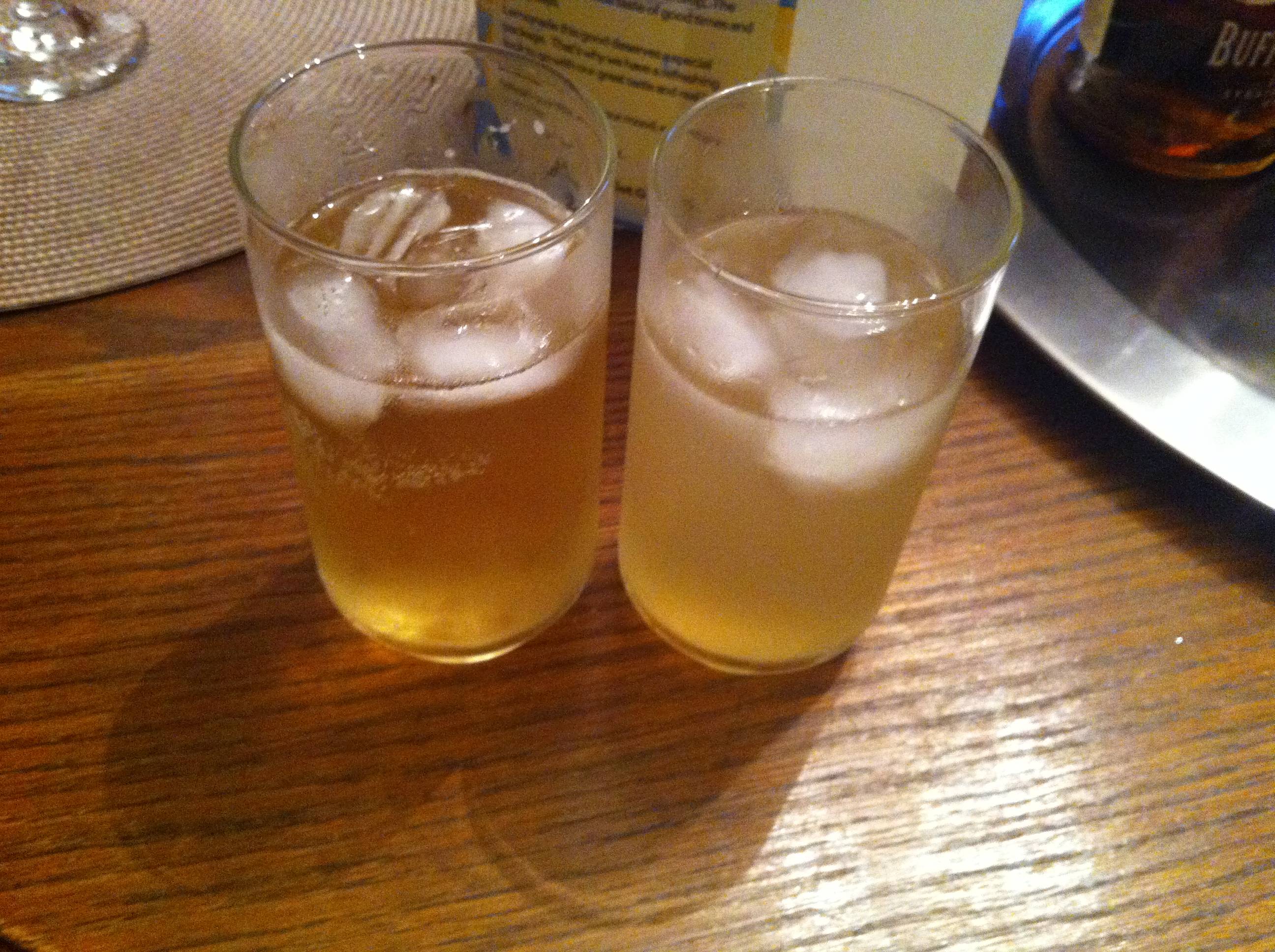 Next up is the Spiced Rum and Lemonade mix. This is also pretty stinking delightful. It’s got a weird mix of the lemon and the spice that almost tastes like cream soda. It’s good, but too sweet, I think. Claire agrees and so we’re off to round two.

Round Two: I’ll be honest. Things kind of broke at  Round Two. We made a few drinks, drank them and we’ve now managed to lose track of which order we had what drinks in… This has a lot to do with our eating dinner at the same time. Which, incidentally, was our wine-braised beef short ribs over pappardelle. That was such a successful use of our new dutch oven…  So without belaboring the point, I’ll just give you a run-down of the drinks that were made and what our thoughts were about them.

Firefly Sweet Tea and Lemonade: This is a classic in Charleston in the summer, but I wanted to make a little more Fall. So we threw in a healthy dash of cinnamon and nutmeg. This blasted what was a bit of a hum-drum drink into the stratosphere of tastiness. It tastes like Sweet Tea-Apple Pie.

Bourbon and Ginger: The Buffalo Trace really makes this very tasty. I’m glad we didn’t have any Blenheim’s, too, because that’d just take away that sweet, spicy bourbon flavor. Claire likes it, but doesn’t love it. So, probably a no-go.

Bourbon and Lemonade: Being a few drinks in, we didn’t bother with this mix. We’ve made it before when it was hot and we didn’t have any better mixers for cheap bourbon.

Other Drinks: We had a second of the Firefly Sweet Tea and Lemonade then another Rum and Ginger Ale, and then we tried some other mixes that we didn’t take pictures of and I don’t exactly recall our impressions of.

So, in short, we made some very nice cocktails and will sleep incredibly soundly.

We will announce the winning cocktail in the days leading up to, or shortly after the wedding itself, since this will be the signature cocktail at the reception. Either way, you’ll have a little something of our own making to sip on before we wine and dine post-wedding.