Sunday evening was a cold, wet, chilly time that called for one thing and one thing only: chili.

The best thing about our smoker (aside from its delicious smokiness) is that it stocks us with a week’s worth of meat. This could be because we never can seem to pick anything less than a eight pound cut (hey, when it’s on sale how can you pass up a deal? I bought a six pound corned beef for $3 after St. Patrick’s Day…but hey again! That’s a heckuva deal! And you know we will eat it.)

The pork butt we cooked over a week ago is still good and fat in our fridge, needing to be used. We have been adding it here and there to our meals (I might have overdosed on pork while Jamey was gone last week), but  I suggested a white bean chili as our next leftover pork venture in lieu of chicken.

Based on a recipe by the Pioneer Woman, I bring you Jamey and Claire ‘s Other White Chili. 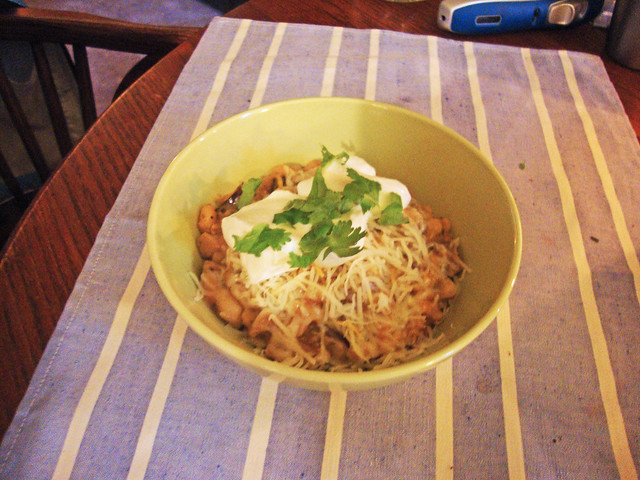 Ready to dig in?

Off the bat, toss in a little bit of the pork fat with the onions to simmer until onions are softened and lightly browned for about 10 minutes. Add the rest of the pork, the jalapeno, squeeze on the lime, and mix in the two spice packets (you could follow the Pioneer Woman’s spices if you want to make things a little more complicated for yourself, but the spice packets pretty much cover all that you’ll need to taste.) 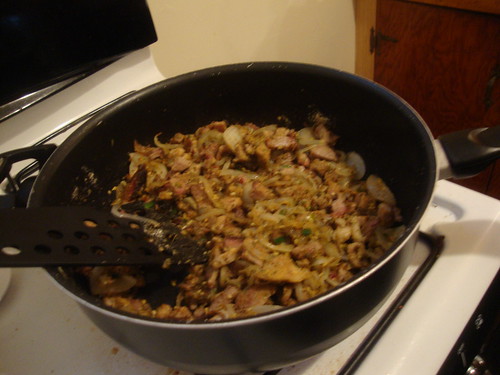 Not quite pretty yet

After the pork has marinated in the dry spice for a couple minutes, open the cans of beans and pour them in. Mix and let the pot simmer for about 10 minutes on medium heat.

At this point, we felt the chili was looking a little dry. To prevent the meat from drying out, I began adding in skim milk. (The Pioneer Woman recipe calls for cornmeal and whole milk to combat this, but since we only had skim milk in our fridge, skim milk it was.) And honestly, I think cornmeal would have thickened the chili too much – a direction we did not want to take.

Eyeball the thickness of the chili at this point. If it needs more milk, add more milk; if you think an extra can of beans is better, do that. Really, the smell of the whole dish is probably going to be overtaking you at this point, and I think you’re going to do whatever it takes to finish the cooking and get to the cooking. At least…that is how I reacted after a spoonful taste test.

Let the chili simmer for about 5 more minutes on low heat. (Also good if you need to delay the meal while awaiting the finishing touches on your garden sours.) Then grab the bowls, a couple spoons, and serve. A dollop of sour cream here, a tablespoon or so of cheese, a couple sprigs of cilantro all on top – and dig in. 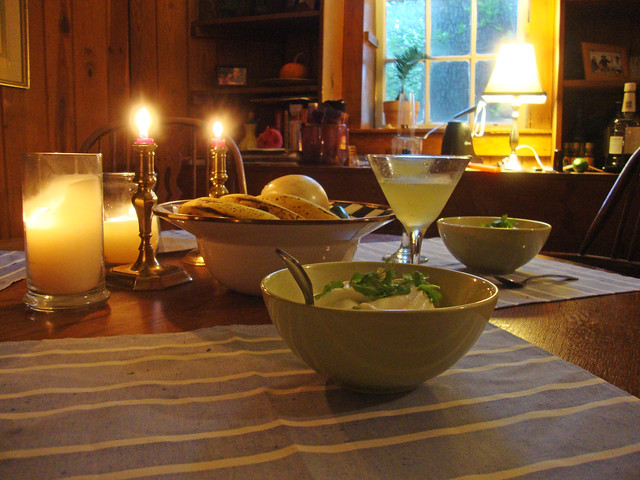 And don’t forget your garden sours!

In hindsight, the smoked pork really added a whole new level of flavor to this dish. Still, I’d say this Other White Chili has earned the honors of a Top 5 Dish in the Jamey & Claire household.

3 thoughts on “The Other White Chili”

Per usual, entranced with this child's eating skills. 💗 #rinajames #finemotorskills #happyweekend
We binged the 6-part Pride & Prejudice the past few nights. There are so many storylines I could dive deeper into, and one of those is of the sisters themselves. This rewatching is my first since having two daughters--sisters--and it's amazing how the relationship of Elizabeth and Jane rings even truer for me, not to mention that of Darcy's and Georgiana. Austen's writing is timeless. As for these two, they know how to make plenty of mischief à la Kitty and Lydia, and neither can yet compare to Jane's harmonious nature. But I love watching their friendship unfold and hope Austen's characterization of sisterhood is one they agree upon as they grow. 🖤 #roseandrina
Ordered myself a little treat: this brass glass wall frame, which I filled with a yard bouquet Rose gave to me a month ago. The flowers have been pressed in a book since. Here's to remembering the simpler times of this quarantine. 🌼 . . . . . . #weeds #frontyardgarden #diy #pressedflowers #wallart #quarantinelife #quarantinewithkids #covidkindness #slowdown #slowliving #littlethings #easygifts #momlife #girlmom #giftideas #giftsforher #walldecor #treatyoself
Saga of the Titanic, lest we forget. 🚢 (She has had this hanging on her wall the past 5 months.)
They're too fast for my camera. #quarantinelife #roseandrina
Motherhood: busting into your daughter's bedroom because you've realized she stayed up 1.5 hours past bedtime. Why? Because she was gifted a box of Jamey's old books, including this gem printed in 1960, stamped as a DISCARD from Battery Creek Elementary School, and purchased by forementioned for 25 cents. Rose stayed up late because she couldn't put down reading, "SITTING BULL: Dakota Boy." I had to take it away from her and scold her to go to bed, but now we are online looking for all the 'Noted Wives and Mothers' books in particular. Update: ordering.